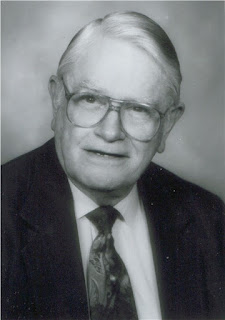 For God did not appoint us to wrath, but to obtain salvation through our Lord Jesus Christ, who died for us, that whether we wake or sleep, we should live together with Him.
-1 Thessalonians 5:9-10

Robert L. Sumner loved the lost and had a passion for lovingly pointing others to a saving knowledge of Jesus Christ.  I saw his concern over whether there were lost people in a worship service in which he as to preach.  I saw him graciously witness to a restaurant waitress.  He shared the advice that if you say a personal word or two to a person before leaving them a gospel tract, they will be much more likely to read it.

The Biblical Evangelist and R. L. Sumner’s writings and ministry were well-known and influential in Independent Baptist and Southern Baptist circles, and elsewhere.  He was an interesting writer who excelled in defending the basics of the Christian Faith and Baptist beliefs.  Adrian Rogers was known to order hundreds of Sumner’s booklet on An Examination of Tulip: The Five Points of Calvinism.

Robert L. Sumner was the author of numerous books including “The Honor Was All Mine,” and “Fights I Didn’t Start, And Some I Did (2 volumes).” He wrote commentaries on James, Hebrews, Ephesians.  His books were recommended by such men as Adrian Rogers, Paige Patterson, O. S. Hawkins, Bailey Smith, Jerry Vines, John R. Rawlings, Lee Roberson, Tom Malone, Hyman Appelman.

He was an independent Baptist who had no problem ministering with Southern Baptists and all who believed in the fundamental doctrines of Christianity.  His book reviews were honest, helpful and told you if he disagreed.  He favorably reviewed many books by Southern Baptists.

His books have invaluable apologetic material defending Christian doctrine.  They are also known for containing a wealth of good sermon and Bible teaching illustration material.  For these reasons his books are treasured by preachers, Sunday School teachers, and Bible students.  No one could defend a Bible doctrine like Sumner.

Dr. Sumner fought against the “King James Version Only” view that swept many independent Baptists. He spoke against KJV Only with John R. Rice at the Sword of the Lord, as well as following years at the Biblical Evangelist.

Joel W. Hemphill, the musician, claimed Jesus is not God and said he and others were going to bring down the Trinity.  Robert L. Sumner confronted him and demolished Hemphill’s arguments in Fights I Didn’t Start, and Some I Did, vol. 1, chapter 11.

Sumner boldly, though sadly, confronted the improper behavior of Jack Hyles and refused to back down when faced with great opposition.

Sumner and the Biblical Evangelist were influential in the Conservative Resurgence in the Southern Baptist Convention.

I did not agree with Sumner on every detail.  But I mostly agreed with him.  And I was always ready to give him a hearing.  He served as a balance to much of the contemporary doctrine and practices of today.

Robert L. Sumner personally knew so many of the great Christian leaders of the early and mid 1900s.  He wrote about many of them in the book, The Honor Was All Mine.

I’m honored to say R. L. Sumner preached in my church, Northside Baptist, Highlands, Texas.  He also preached in both my brother’s churches.  Whether your church was large or small, he was happy to preach God’s Word and tell the lost about Jesus.

In 2005 I wrote a book about my dad, The Wit & Wisdom of Pastor Joe Brumbelow.  This was before I personally knew R. L. Sumner; but I mailed him a copy of the book for possible review.  A little nervous, I knew Sumner would give his honest opinion.  He ended up writing a very positive, gracious review.

About a year later my mother, Bonnie Brumbelow, and I had the opportunity to meet R. L. and Dottie Sumner at a Baptist conference in North Carolina.  We spent some time together, and it seemed as though we had been close friends for years.

Dottie Sumner endorsed my mother’s cookbook and commented to us how much she enjoyed cooking some of the recipes and how much her husband enjoyed eating them.

Dr. Sumner would later give a strong, helpful endorsement to my book, Ancient Wine and the Bible: The Case for Abstinence.  Advertising these books in The Biblical Evangelist also proved helpful.

In the interest of fairness I must add a negative.  I took R. L. Sumner out to eat at Sudie’s in Houston, TX and noticed he refused to eat his vegetables.  Sure enough, it killed him at age 94!  In spite of Sumner’s example, I still advise everyone else to eat their fruits and vegetables!

On another occasion several years ago we walked by a brick area where water spouts were randomly shooting up and kids were playing in the water.  Sumner made a joking, disparaging comment about them.  I replied, “80 years ago you would have been right in the middle of those kids playing in the water.”  He laughed and admitted I was probably right.

Not too long ago I mentioned to Dr. Sumner that I remembered him when he was a mere 84 years old!

We have been blessed by Robert L. Sumner, his preaching, his books, and The Biblical Evangelist.  Preachers, Bible teachers and students – get every one of Sumner’s books you can find.  In addition, put them in libraries.

“Soldiers like Dr. Bob are no longer around.  This represents a substantial loss for all of us who fought by his side. You always knew that he would take care of his assignment and hold his line.  I never had to wonder or worry about a missile launched from his area of the battle field.  Yet, he was a gentle and compassionate soldier who would bind up the wounds of an opposing soldier who moments before had sought to take his life.
I never once had to guess where he would come down on any issue.  Where can we find such granite like strength so clothed in the softness of mercy? God bless you forever Robert Sumner, and may heaven bring you as much joy as you have brought to all of us.”
-Paige Patterson, Southwestern Baptist Theological Seminary

Memorial Gifts may be sent to the Biblical Evangelist.

Then I heard a voice from heaven saying to me, “Write: ‘Blessed are the dead who die in the Lord from now on.’” “Yes,” says the Spirit, “that they may rest from their labors, and their works follow them.”  -Revelation 14:13

John R. Rice and KJV Only


Other articles in lower right margin.
Posted by David R. Brumbelow at 11:35 AM 1 comment: