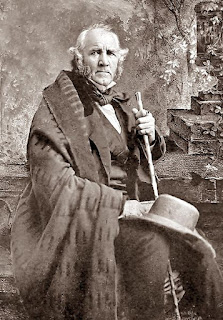 I hope you’re attending the annual meeting of the Southern Baptist Convention, meeting this year at the George R. Brown Convention Center, Houston, Texas. It will be a great time of fellowship, learning more about the ministries of the SBC, some important votes, and hearing some great singing and preaching.

You may not know that Houston, TX is named after a Baptist, a Southern Baptist. It is named for Sam Houston.

Sam Houston (AD 1793-1863) is the only man who served two states as Governor, Tennessee and Texas. For a time he lived among the Cherokee Indians and had great respect for American Indians when few others did. Previous to his arrival in Texas he served in battle with General Andrew Jackson and they remained lifelong friends. Houston served in Texas as General, President (before Texas became a state of the USA), Senator, and Governor. He opposed the Civil War and Texas succeeding from the Union, and was deposed as Governor. Often drunk before his conversion, he later became a temperance speaker.

Influenced for Christ by his wife, and Baptist preachers George W. Samson and R. C. Burleson, he accepted Jesus as his Savior and was baptized in a creek at Independence, TX in 1854. He became a very dedicated Baptist layman.

While in Houston, be sure to visit the San Jacinto Battlegrounds where Texas won it’s independence from Mexico under the leadership of General Sam Houston in 1836. It also includes the Battleship Texas.

You might also be interested in eating at the Monument Inn, by the San Jacinto Monument and Park:

If you are arriving early for the SBC, you may want to attend the Southview Bible Conference June 7-9.

Your kids might also like driving through the Washburn Tunnel, the only one in Texas. It goes under the Houston Ship Channel. Take Federal Road south off of Interstate 10 on the east side of Houston:

One final note. Some feel they have to be an official, elected messenger from their church in order to attend the SBC or Pastor’s Conference. That is not true. Anyone is welcome to attend, whether or not you are a messenger. If you live in the area, go to one or two of the sessions. Check out the Display Area with displays and booths from a number of our SBC seminaries, mission boards, and agencies. It can be a real education. Go to sbc.net for more details on the convention, or look for them in your state Baptist paper.

Hope you have a great trip to Houston this year. While you’re here, tell someone about Jesus. Give them a good tip and a Gospel tract. Pray that God will do great things in Houston, the SBC, and our nation.

Note:  More information on Sam Houston is found in The Wit and Wisdom of Pastor Joe Brumbelow.  Click book cover in right margin.

Other articles in lower right margin.
Posted by David R. Brumbelow at 11:22 AM 5 comments:

John Kitto on Wine in Bible Times, and Isaiah 25:6

John Kitto (AD 1804-1854) was an outstanding Bible scholar. His work was highly praised by Charles H. Spurgeon. A keen observer of physical detail, while living in the Middle East he gained detailed knowledge of the land and the people; people who lived much as they did in Bible times. Kitto’s Cyclopedia of Biblical Literature (1852) was a standard for decades.

John Kitto has the following to say about wine in Bible times:

“WINE. No fewer that thirteen distinct Hebrew and Greek terms are rendered in our common version by the word ‘wine.’ Besides the pure juice of the grape, frequent mention is made in Scripture of a kind of boiled wine or syrup, the thickness of which rendered it necessary to mingle water with it previously to drinking (Proverbs 9:2, 5), and also of a mixed wine, made strong and inebriating by the addition of drugs, such as myrrh, mandragora, and opiates (Proverbs 23:30; Isaiah 5:22). This custom has prevailed from the earliest ages, and is still extant in the East.

We are not, however, to conclude that all mixed wine was pernicious or improper. There were two very opposite purposes sought by the mixture of drinks. While the wicked sought out a drugged mixture, and was ‘mighty to mingle strong drink,’ Wisdom, on the contrary, mingled her wine with water or with milk (Proverbs 9:2, 5) merely to dilute it and make it properly drinkable. Of the latter mixture Wisdom invites the people to drink freely, but on the use of the former an emphatic woe is pronounced.

In Isaiah 25:6, mention is made of ‘wines on the lees.’ The original signifies ‘preserves’ or ‘jellies,’ and is supposed to refer to the wine cakes which are esteemed a great delicacy in the East.”
-John Kitto, The Popular Cyclopedia of Biblical Literature; 1852.

Note: This boiled down, thick, strong wine was not alcoholic and would not spoil or ferment. It would be mixed with water to drink. I have some, kept at room temperature, that is in perfect condition after several years. See much more on wine in Bible times, and on Isaiah 25:6 in the book, Ancient Wine and the Bible.

Articles:
When I'm An Old Lady
Ancient Wine Production and the Bible
Charles H. Spurgeon on Alcohol
Alabama Baptist Review of "Ancient Wine and the Bible"
Deuteronomy 14:26 - Does it Commend Alcohol?

Southview Baptist Church will hold an outstanding Bible Conference just prior to the annual Southern Baptist Convention meeting this year in Houston, Texas. If you arrive early, be sure to attend.

Southview Baptist Church, Rosharon, TX is located on Hwy 288 south of Houston, and one mile south of Hwy 6.


More articles in lower right margin.
Posted by David R. Brumbelow at 7:13 AM No comments:

John R. Rice and KJV Only

KJV Only is the relatively modern belief that the King James Version of the Bible is the only one that should be used by English speaking people. There are different versions, if you will, of this view. Some believe the KJV itself is inspired, perfect, and inerrant. Others would simply say it is by far the best and other English translations are in error, liberal, leave out the Word of God, or they are even of the devil.

Many have wondered what Dr. John R. Rice (AD 1895-1980), a well-known independent Baptist preacher, author, and founding editor of the Sword of the Lord, had to say about KJV Only. Some have wrongly assumed he was KJV Only.

Rice did use the KJV in the pulpit. It was obviously his favorite translation. And it should be remembered he was writing in 1969 when the KJV was by far the most popular and a number of the modern versions of today had not yet been translated. But Dr. Rice was far from KJV Only. In addition to the quotes below, during his leadership, Rice had others such as Robert L. Sumner write articles in the Sword of the Lord against KJV Only.

The quotes below are from -
Our God-Breathed Book The Bible
by John R. Rice, Sword of the Lord Publishers, Murfreesboro, TN; 1969.

“When we say that the Bible is inspired, we do not refer to the translations or copies but to the original autographs, written down under God’s direction.”

“We think now not of translations and copies but of the original autographs. Of them we are told that “…every word…proceedeth out of the mouth of God” (Matthew4:4). So all must be true. If the Scriptures are God-breathed, theopneustos, as II Timothy 3:16 says, then God did not breathe out errors and mistakes.”

“We are not now discussing the translations. Translators are not inspired, and there can be mistakes in translation although these mistakes are largely overcome by having translations checked and double checked by numerous godly scholars. There may be mistakes in copying, though such mistakes can usually be found by comparing manuscripts with manuscripts since there are hundreds of manuscripts of the New Testament available and many of the Old Testament. But when we speak of inspiration, we speak of the original autographs written down in the Old Testament in Hebrew, except for a small part of the book of Daniel which is in Chaldaic, and the New Testament, which is in koine Greek.”

“A perfect translation of the Bible is humanly impossible. The words in one language do not have exactly the same color and meaning as the opposite words in another language, and human frailty and imperfection enter in. So, let us say, there are no perfect translations. God does not inspire particular translations, although He may illuminate and give spiritual wisdom to the translator.”

“The translators of the American Standard Version had the advantage of having access to the three oldest manuscripts with which we are familiar - the Vatican, the Alexandrian, and the Sinaitic manuscripts.”

“The scholar and the preacher would do well to have the American Standard Version at hand and to consult it when necessary, but generally would do well, we think, to use the King James Version in the pulpit, in memory work, and in class teaching, since it is actually the translation of the mass of people. And the beauty of its language is not equaled in other translations, we think.”
-John R. Rice, Our God-Breathed Book The Bible, Sword of the Lord Publishers, Murfreesboro, TN; 1969.

John R. Rice and the Sword of the Lord; Part 1
B. H. Carroll on Inspiration of Bible
The Girl Who Saved His Ministry
Other articles in lower right margin.
Posted by David R. Brumbelow at 8:20 AM 8 comments: