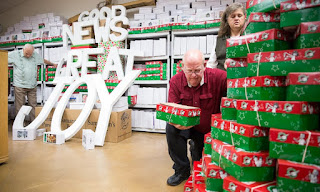 Pastor Mark Brumbelow and his wife Cherry pray over Operation Christmas Child shoeboxes during a service at Grace Baptist Church of Wild Peach in Brazoria, Texas.

Brazoria, Texas, United States
November 10, 2015
Along the Gulf Coast sits Brazoria County, proclaimed by the local newspaper to be “Where Texas Began.” It is home to the first capital of the Republic of Texas, as well as the Brazos River which early Spanish explorers named “The River of the Arms of God.” Just five miles from that river and 60 miles south of Houston, the village of Wild Peach experienced God’s embrace the last weekend in October.

As rains from the remains of Hurricane Patricia hammered the area, a tornado headed straight for Wild Peach—including its one convenience store, an elementary school, three churches, and numerous homes. The storm was averted, though, and some believe that was in part due to what happened in Grace Baptist Church earlier that day.

This congregation of 25, whose pastor is also a taxidermist, set out Saturday morning to finish their year-long goal of packing 2,000 Operation Christmas Child shoebox gifts. With just 270 shoeboxes to go, they planned to continue packing boxes as long as they had gifts left to fill them.

Church members and friends, both old and young, made their way around tables piled with toys, school supplies, and hygiene items to pack shoeboxes with gifts for children in need around the world. As Charlie Meazles, a Marine veteran of the Korean War, packed a box for a two- to four-year-old boy, he said, “I do it for the kids everywhere. I hope they come to know Jesus as their Lord and Savior.”

Within hours, they had officially completed 2,118 gifts. Pastor Mark Brumbelow said, “This is not something Grace Baptist has done. This is something the God of Heaven allowed us to be a part of.”

Trusting God to Fill Them
Mark and his wife Cherry packed their first shoebox gift 13 years ago. For the first 10 years or so, they would pack three—one in honor of each of their boys—and their church as a whole would pack anywhere from seven to 20. “We were proud of that,” Mark said, “and I’m still proud of that. It was good. It was right.”

That year they drove more than four hours to an ice-covered Dallas to volunteer at the Operation Christmas Child Processing Center.

“If I’d have known how icy the roads were in Dallas, I never would have gone,” Mark said. But there as they inspected shoeboxes and prepared them for international shipping, they learned about the opportunity to volunteer with the project year-round. Discovering that the Gulf Coast didn’t have many volunteers, Cherry signed up and soon became the community relations coordinator for three counties.

Driving home from Dallas, Cherry suggested that they do 500 boxes in 2014.

Mark thought, “That’d be nice!” But he prayed, “Lord, we can’t do that. That’s impossible! But if you want us to do it, we’ll do the best we can, and get as far as we can in that direction. I just think you’re asking too much of us.”

The next Sunday, Mark preached on 2 Kings 4 where Elisha tells the widow who had no money left to borrow jars from her neighbors so he could fill them with oil. During the sermon it hit Cherry that it was the widow’s job to get the containers and God’s job to fill them.

Sensing she just needed to get 500 shoeboxes and trust God for the contents, Cherry went to a nearby store on Monday morning to see if she could get shoeboxes. They gave her some, and she repeated the trip every week until she had 500 boxes.

The church was skeptical of the new goal, but they gave it their best effort and ended up packing 532 shoeboxes!

That was only part of the challenge, though. Samaritan’s Purse requests that a $7 donation accompany every shoebox gift to cover the cost of shipping. Throughout the year, Grace Baptist had collected $1,200 for this purpose—in part through generous monthly donations from a church member with Down syndrome—but that was nowhere near the more than $3,500 needed. A travelling construction worker who had visited their church surprised them with a gift of $1,000 for the shoebox shipping. Then another couple in the church had some extra funds come in and offered to pay all that was left of the shipping costs.

The next Sunday, Mark announced that the shipping was covered, but he also said, “If the Lord’s leading you to give anything for Operation Christmas Child and you’ve not yet given, today’s the day to come clean with God.” This prompted the church to give another $400. They sent all of it in to cover the shipping of their own shoeboxes, as well as some other boxes sent to Samaritan’s Purse without the requested donation.

‘Give, and It Will Be Given to You’
This was also the time of year when Southern Baptist churches set goals for their Lottie Moon Christmas missions offering, named after a pioneering female missionary to China. In the past, Grace Baptist’s goal had been around $750. But in 2014, someone in the congregation suggested that their goal wasn’t a dollar amount, but rather obedience to God. So, instead of writing a projected financial goal on the posters they placed around the church, they simply wrote “obedience.”

Mark feared that because of their Operation Christmas Child giving that their Christmas missions offering would suffer. But he said, “Last year after packing 500 shoeboxes, our Lottie Moon offering doubled over what it had ever been before. I’m telling you Luke 6:38 is true. ‘Give, and it will be given to you.’”

This biblical principle was true for the church in other ways as well. Early on, when Grace Baptist paid their bills, there wasn’t enough leftover to pay their pastor. But since they’ve been giving to Operation Christmas Child that has changed.

Celebrating More than 2,000 Shoebox Gifts
Mark and Cherry volunteered at the Processing Center in Dallas again in 2014 and as they prayed on their way home, they felt God was asking them to fill 2,000 shoebox gifts in 2015.

“It is no bigger of a deal to God to fill 2,000 boxes than it was to fill 500,” Mark said. But to his congregation, it felt overwhelming. That only increased their sense of celebration on Saturday, October 24, when they exceeded their goal.

The next morning, church members entered the church to find every one of their 2,118 shoeboxes lining the front, sides, and center aisle of their church building. To the right of the podium, which bore an Operation Christmas Child logo, shoebox gifts formed a Christmas tree.

After a verse of “Victory in Jesus,” Mark said, “I believe this is the happiest day for our church.” Drawing from Psalm 2:8, he went on to say, “God is letting us have the nations as our inheritance.”

“We said, ‘We can’t, but if You help us we will,’” Mark said, recapping their journey over the past year. Tears flowed as he recounted God’s faithfulness to help them surpass their goal to bless children in need around the world with a tangible gift of God’s love.

“Are you wrapping your minds around these numbers?” Mark asked.

Then Mark proceeded to share that someone from outside the church had handed him a check that morning for $14,000, specifically to cover the shipping expenses. Gasps went up around the room.

They now had $18,845.46 to cover shipping for their boxes and they committed to sending it all to Samaritan’s Purse.

“I believe the highest form of worship we give to God is when we offer up to Him what we’ve sacrificially given,” Mark said.

The congregation dispersed around the room to lay hands on the shoeboxes. Cherry prayed, “Give these boxes to the boys and girls they’re just right for. We pray for every child, every community that will be impacted by these boxes.”

Others joined her in praise and thanksgiving. One even confessed, “When Mark said we’d pack 2,000, I thought he was crazy.”

But God did it.

“We haven’t done anything special, but seek to obey God and what He’s told us to do,” Mark said. “There’s nothing special about Grace Baptist Church or its preacher. But I tell you there’s something mighty special about the God that we serve.”
-Article written by Samaritan’s Purse.

More articles in lower right margin.
Posted by David R. Brumbelow at 10:49 AM No comments: